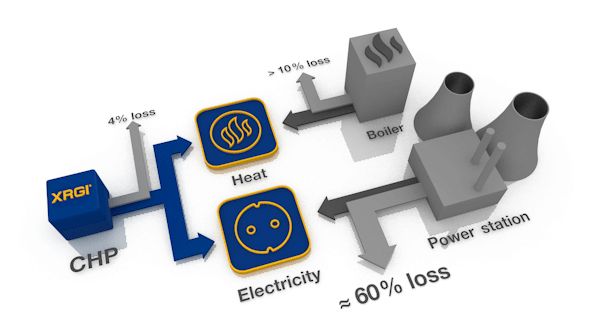 Combined heat and power or CHP, also called cogeneration or distributed generation, is the simultaneous production of two types of energy – heat and electricity – from one fuel source, often natural gas. The ability to create two forms of energy from a single source offers tremendous efficiency and thus both cost savings and environmental benefits.

The key components of a combined heat and power system are an internal combustion, reciprocating engine driving an electric generator. The clean natural gas fired engine spins a generator to produce electricity. The natural byproduct of the working engine is heat. The heat is captured and used to supply space heating, heating domestic hot water, laundry hot water or to provide heat for swimming pools and spas. The CHP process is very similar to an automobile, where the engine provides the power to rotate the wheels and the byproduct heat is used to keep the passengers warm in the cabin during the winter months.

Combined heat and power systems use fuel very efficiently. A CHP system provides electricity and heat at a combined efficiency approaching 90%. This is a significant improvement over the combination of the 35% efficient electric utility and a conventional heating boiler with a 65% seasonal efficiency.

Why is there such a big difference in fuel efficiency between the electric utility and a combined heat and power system? The electric utility and CHP system each produce electricity and heat from one source of fuel. However, the heat produced at the electric utility is not used; it goes into the cooling water or up the smokestack along with greenhouse gases and other pollutants. Approximately two-thirds of the fuel’s energy is wasted. Alternatively, while generating electricity, a properly sized combined heat and power system recovers nearly all of the heat it produces.

RLN Energy Services Can recommend, locate, install & Commission the system that is right for you and your operation.

HOW TO REACH US